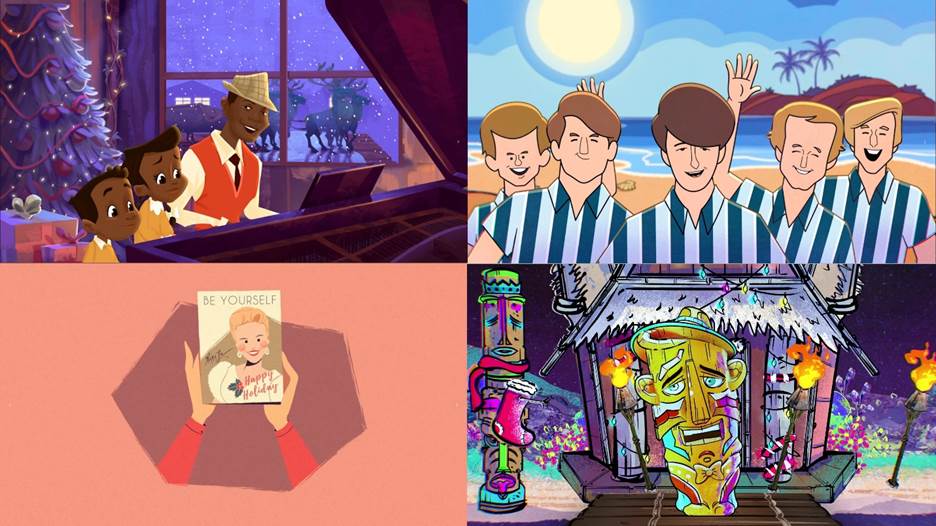 Los Angeles – December 14, 2020 – The Beach Boys help surfing Santa deliver holiday cheer in “Little Saint Nick,” Bing Crosby goes tiki for a tropical Christmas in “Mele Kalikimaka,” Nat King Cole performs “The Christmas Song (Chestnuts Roasting On An Open Fire)” as a brother and sister embark on a Christmas Eve adventure and discover the meaning of Christmas, and Peggy Lee soundtracks the hustle, bustle and excitement of the last day in the office before the holiday break in “Happy Holiday,” in the first-ever official videos for these Classic Christmas songs. The videos are the latest from UMe, the global catalog company of UMG, which has partnered with legendary artists and estates to create vibrant new visuals for some of the most iconic and beloved songs in the Christmas canon that have never had a video. The initiative recently launched with animated clips for Chuck Berry, Ella Fitzgerald, Frank Sinatra and two of Crosby’s other chestnuts.

The beautifully hand drawn and painted videos were created by Fantoons Animation Studios with the exception of “Happy Holiday,” which was illustrated by BluBlu Studios in a distinctive, vintage style. The recently released videos feature Crosby bringing joy to a down in the dumps town with his trusty Bing-O-Matic™ in “Winter Wonderland” and crooning over a multigenerational military family’s holiday gatherings in “White Christmas,” guitar-clad Chuck Berry giving Santa a hand with his Christmas rounds in vintage comic book style in “Run Rudolph Run,” Ella Fitzgerald and Frosty delighting in a winter wonderland storybook setting in “Frosty The Snowman” and Frank Sinatra delivering mid-century style, glitz and grace as only he can in the holiday classics, “The Christmas Waltz” and “Mistletoe and Holly.”

“UMe is incredibly honored and excited to partner with these legendary artists and estates to celebrate their iconic holiday songs and give them official videos,” says Bruce Resnikoff, President and CEO of UMe, the global catalog company of UMG. “Last year was the first time we created holiday videos and we had such a tremendous response. These songs are some of the most popular year to year and we hope these videos brighten up fans’ holidays.”

Watch/embed playlist for all videos here

“Never did we imagine that a song we recorded 56 years ago would find new life as an animated music video! We are thrilled that ‘Little Saint Nick’ is included in UMe’s second year of holiday compilations along with so many other incredible artists. Sharing the Christmas vibe is more important than ever this year and we hope you love watching Santa surf as much as we do!”

“Keeping dad’s spirit alive, especially during the holidays, is not only of huge importance to us as a family, but to everyone. During these trying times his voice gives hope and comfort to all of us. I am thrilled that there is another way dad is being seen and heard. I love the videos Universal came up with and, of course, love his music! Dad believed supporting the troops was one of the most important contributions that he made in his life. When he was asked about his career it wasn’t his awards or the fame that came his way, it was that ‘in some small way, if he made the life of a soldier a little bit easier then, that was what mattered. The video for ‘White Christmas’ is a wonderful tribute to his love and appreciation for the troops.”

“What an honor to have ‘Run Rudolph Run’ given such a dazzling visualization as its first music video! The marriage of animation and music could not be better – you can’t beat flying reindeer, Santa Claus and electric guitar! My dad always told stories in his songs and his poetic skills are on full display here. The lyrics tell a Christmas story that young and old can’t help but enjoy. Fun, frolicking and certainly perfect for the season, it was a holiday favorite in our house and we hope this video for a timeless Chuck Berry song brings joy and helps people get in the spirit this holiday season.”

“Since it was released 60 years ago, Ella Fitzgerald’s Ella Wishes You a Swinging Christmas has remained a perennial and beloved standard for the holidays, livening up countless festivities and family gatherings with its joyful and jazzy takes on Christmas classics, including the swinging ‘Frosty The Snowman. The Ella Fitzgerald Estate is thrilled to partner with UMe to bring Ella and Frosty to colorful life in this fantastic, beautifully animated video and hope that both Ella’s fans and the new generations just discovering her music will love it. What a wonderful gift for the song and album to receive as it celebrates its 60th anniversary!”

“I really think he might be the voice of Christmas. I just think that the sentimentality of my dad’s recordings is what grabs people. He was emotional when he sang them, and people are emotional when they hear them. That doesn’t really change.”

TIMOLIN AND CASEY COLE OF THE NAT KING COLE ESTATE

“Christmas was always our favorite holiday. Our house was filled to the brim with decorations, tinsel, ornaments, bows, the smell of food, and of course, the Christmas songs my dad had recorded. We would all sit around the piano and sing along with him or sit in the living room and listen to him sing and play. These are the magical moments we remember with such fondness and this delightful new video for his beloved “The Christmas Song” transports us back to those treasured times and beautifully captures dad’s spirit.”

“‘Happy Holiday’ is one of my favorite Christmas songs of my grandmother’s, not only because of its beautiful message about connecting with loved ones at holiday time, but also because of the joy that I hear in my grandmother’s voice. I can actually hear her smiling when she is singing the lyrics to this beloved Irving Berlin classic. When she recorded this song in 1965, I don’t think she could have ever imagined that, in the year 2020, her timeless recording would inspire a heart-warming animated holiday video that beautifully portrays the importance of love and acceptance, of self and others. She would be so happy and proud, as I am.”

These videos are just some of the many ways that UMe is celebrating its unmatched Christmas catalog and helping to turn up the joy this holiday season. In addition to the animated videos, several new releases are now available including Peggy Lee’s Ultimate Christmas, a new collection featuring 22 holiday classics from the legendary singer, songwriter, composer and actress that draws from her Capitol and Decca catalogs, as well as Disney’s “Lady and the Tramp” soundtrack, and two duets with Bing Crosby—“Little Jack Frost Get Lost” and “Here Comes Santa Claus;” Anne Murray’sThe Ultimate Christmas Collection, featuring 22 personal favorites hand selected by the Canadian music legend from her six chart-topping Christmas albums released since 1981; the lavish vinyl box set, Verve Wishes You a Swinging Christmas, which brings together some of the most classic jazz holiday titles – Ella Fitzgerald’s Ella Wishes You a Swinging Christmas(1960), Kenny Burrell’s Have Yourself a Soulful Little Christmas(1966), Ramsey Lewis’s Sound of Christmas (1961) and Jimmy Smith’s Christmas ‘64 (1964) (also known as Christmas Cookin’) – for the first time; the compilation album, NOW That’s What I Call Music! R&B Christmas, which presents 18 holiday tracks by the world’s biggest R&B stars, including John Legend’s version of “Silver Bells,” The Temptations’ “Silent Night,” Stevie Wonder’s “Someday At Christmas,” tracks by The Supremes, Marvin Gaye, Jackson 5 and more; and world-renowned producer, songwriter and multiplatinum recording artist, ASHBA’s new holiday single, “A Christmas Storm,” an exciting new instrumental mashup of holiday classics such as “God Rest Ye Merry Gentlemen,” “Carol Of The Bells,” “Joy To The World” and “Hark The Herald Angels Sing,” that mixes explosive hard rock with propulsive EDM to bring holiday cheer to the dance floor.

Christmas With The Beach Boys

Christmas With The Jackson 5

This season, UMe has opened its cherished holiday music library to some of the most exciting electronic music producers around the globe for a set of inspired, new Lofi remixes of classic Christmas and wintery songs from legendary artists like Billie Holiday, Ella Fitzgerald, The Temptations and more. The eight-track Lofi Holiday Mixtape features international festival fixture, Canadian DJ/producer BLOND:ISH, and “the queen of Lofi,” Dutch producer eevee, alongside a bevy of up-and-coming producers from the burgeoning Lofi scene, including Auxjack, Hyphen, Kuji, Somni, Roelo and V.Raeter. Some of the best-known Christmas chestnuts like “Rudolph The Red-Nosed Reindeer,” “Silent Night,” “Winter Wonderland,” “Have Yourself A Merry Little Christmas,” “Up On The House Top” and “We Wish You A Merry Christmas” have been given the Lofi treatment, transforming these timeless songs into modern day remixes by injecting them with downtempo beats, woozy, hip-hop-esque samples and hypnotic loops, creating something uniquely of today yet oozing with nostalgia. The mixtape is available to stream now at all streaming services and each remix is also available individually as a digital single. Additionally, the remixes are accompanied by animated Yule log visualizer videos on the UMG Christmas Music channel to help ratchet up the digital coziness factor and usher in the holidays. Listen to the Lofi Holiday Mixtape: http://lofiholiday.lnk.to/mixtapePR

Edible®, the world’s largest franchisor of fresh fruit arrangements and other treats, has partnered with UMe to expand gifting options for this year’s holiday season by adding a music category with the launch of Edible Music™. Customers will have access to several digital music bundles including Nat King Cole’s The Christmas Song album with the cherished song “The Christmas Song (Chestnuts Roasting On An Open Fire),” staples in many homes around the world, across all ages and demographics. Cole’s songs are incomparable but the warmth of Cole’s voice in his evergreen rendition of “The Christmas Song” is only one of the reasons why the song was inducted into the GRAMMY Hall Of Fame and the album is the best-selling Christmas album released in the 1960s.

Edible Music holiday albums from UMe are available now through December 31. Albums can be purchased as part of a bundle or as an add-on to any order. Customers receive a website and unique code to download the album. The holiday bundles are available at ediblearrangements.com/music-lover-gifts and include the albums:

uDiscover Music is getting into the spirit too with their new holiday hub featuring a variety of gift guides for all types of music lovers, eclectic playlists and the memorable stories behind classic holiday tunes. Visit it here: https://uDiscover.lnk.to/Christmas2020

For those looking for more holiday entertainment, The Ed Sullivan Show’s official YouTube channel is celebrating the season with a music-and laughter-filled holiday playlist. Classics include “White Christmas” by Bing Crosby, “Rudolph The Red Nosed Reindeer” by Gene Autry, “Jingle Bells” by Paul Anka, and more. Festive fun lights up things with “Mrs. Claus Interview” by Stiller & Meara, “Deck The Halls” by the Baird Puppets and holiday cheer with The Muppets.