Bluphoria is a pop rock/alternative band, with psychedelic and southern rock influences.

Founded at the University of Oregon in spring 2019, the band quickly gained popularity around Eugene and Portland, as well as the Bay Area.

Bluphoria released its first single “Kaleidoscope” in June 2020 followed by the official “Kaleidoscope” video which has amassed a stream count of over 20,000. Their EP titled “Alone” with their second single by the same name, has garnered over 22,000 streams. In November of 2020 the band released “Something More” and “Conscientious Debauchery” which has a stream count of 10,000 and counting.

Prior to the Covid-19 pandemic that hit the U.S. in March, Bluphoria played shows at Eugene’s biggest venues, including the WOW Hall, and has sold out smaller venues, college town house shows, as well as playing numerous large protests and live streams in support of various movements and causes.  The band is currently playing in support of their EP “Alone” and double single.

Their energetic and engrossing live show is their star attraction. The band’s songwriting, musicianship, and their studio work has been praised as “perfect for a dance montage, and makes you feel like you’ll be young forever.”

Bluphoria’s “swamp psych-rock” sound takes their influences and churns out a revitalized sound for a new generation of fans. 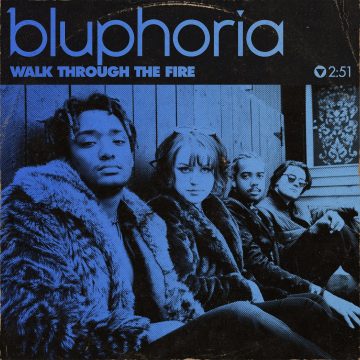